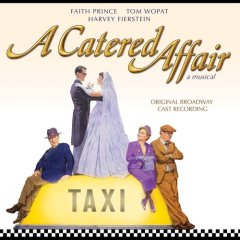 A Catered Affair is a new musical with Music and Lyrics by John Bucchino and a book by Harvey Fierstein (Torch Song Trilogy, La Cage Aux Folles.) The show had it’s first production in the Fall of 2007 at San Diego’s Old Globe Theatre where it won 7 San Diego Theatre Critics Circle Awards:

On April 17, 2008 the show opened at the Walter Kerr Theatre on Broadway where it ran for 116 performances and won the Drama League Award for best musical.

Four Stars! An Affair to remember! This is no run-of-the-mill Broadway musical. Humor, yes, but humanity? That’s rare in a Broadway musical. When it does come along – as it just did – hug it to your heart!”
- Clive Barnes, New York Post

Whether it’s in the exquisite beauty of the underscoring or the introspective songs,
the minor-key beauty of John Bucchino’s music as heard in Jonathan Tunick’s delicate, filigreed orchestrations captivates.
- David Rooney, Variety

A most unusual musical that has the courage of its convictions. A Catered Affair demands serious attention. It’s a musical that is unafraid to stand still and let theatergoers linger in the nuance of love lost and then, most joyously found.
- Michael Kuchwara, Associated Press