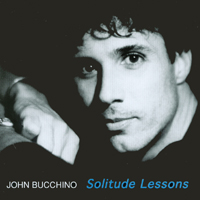 "Whereas the GRATEFUL CD showcases the cabaret side of my writing, SOLITUDE LESSONS is an intimate solo CD which provides a glimpse of a more pop aspect (well, my version of pop, anyway -- I mean it ain't exactly Justin Timberlake...) Listening to it I can hear so many of my influences: Joni Mitchell in "Love Quiz", The Beatles in "Impossible Here", Simon and Garfunkel in "If I'd Been With Him", Stevie Wonder in "The Same Man". I recorded the songs back in the 90's -- most were written after the end of a 6-year relationship. I had also just gotten some home recording equipment so one by one, as I wrote the songs, I overlaid piano, synthesizer, drum and vocal tracks for them, playing all the parts myself. It was first released as a cassette, but after the release of the GRATEFUL CD, I remastered SOLITUDE LESSONS to release as a CD, redid the artwork and here it is. I love taking a song from the writing stage all the way through the recording stage -- doing a "one man band" number -- because the finished product reflects my truest intention for the song.”